The Edmonds Chamber is pleased to bring back our 4th of July celebrations this year and doubly excited to announce Rick Steves as the 2021 Grand Marshal of the “An Edmonds Kind of 4th” Parade.

“For many years we have tried to honor Rick Steves for the work he has done in and out of Edmonds, but for some reason he is never in Edmonds on July 4th.” said Greg Urban, President & CEO of the Edmonds Chamber of Commerce.  “We are thrilled that Rick is home and can finally accept our invitation to be Grand Marshal this year.” 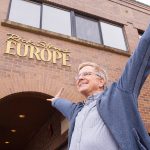 2021 Grand Marshal Rick Steves said “Thanks to COVID (that’s a strange thing to say!), rather than doing my guiding and writing in Europe this summer, I’ll be home for our town’s Fourth of July festivities for the first time in about 30 years. As a child it was an Edmonds event I’d never miss. And this year I’m thrilled to help celebrate by being a part of the parade and honored to be the 2021 Grand Marshal. I’ll be in that slow rolling car, waving, tossing candy, singing Yankee Doodle and whatever I can to join with our entire community to celebrate our freedom, our democracy, and the blessings we have in being American citizens. As a traveler, you can learn a lot about your home by leaving it and viewing it from afar. And I know we have lots to be thankful for and lots to be good stewards of. See you at the parade!”

Last year Farrell Fleming was announced as our 2020 Grand Marshal but never had the opportunity to be in a parade.  We are so happy to announce that this year’s parade will be graced by both Farrell Fleming and Rick Steves.  “It was important that we honor both of our Grand Marshal recipients and provide the community with a way to recognize them for their outstanding work in Edmonds.” said Greg Urban. 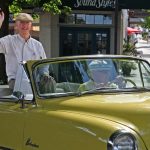 2020 Grand Marshal Farrell Fleming said “It is my pleasure and honor to be participating in this year’s Fourth of July parade as Grand Marshal of last year’s 2020 parade. It is wonderful to see this year’s parade being held due to everyone’s effort to get vaccinated. I was chosen last year to recognize the effort made over the past seven years by the Edmonds Senior Center to bring the Waterfront Center project to fruition. However, instead of one person in a car, it really should be 50+ people in a bus.  An incredible team of generous, talented and productive individuals played essential roles in that effort. At the top of that list would be Rick Steves, this year’s Grand Marshal. It’s hard to imagine the Waterfront Center being successful without his amazing contributions.

In the spirit of Independence Day, the new Waterfront Center will welcome all (as all are created equal), will celebrate Life and Liberty, and will allow individuals, families, groups, and communities to pursue Happiness in its multiple forms. To quote Rose Cantwell, a former President of the Senior Center and a project leader, “The new Edmonds Waterfront Center is the seniors’ gift to the community and the region.” Looking forward to seeing you at the Parade.”

Be sure to add “An Edmonds Kind of 4th” to your July 4th plans this year.

Event info & registration at www.edmondsfourth.com or Edmonds Chamber office at 425-670-1496