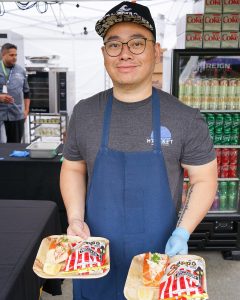 If you ask anyone about Hans, they’ll say he was a very special man with a multitude of talents that carried him far in his career as a chef. In 2015, Hans came onboard at Salt & Iron only to quickly become one of our best line cooks. We felt that Hans had not only shown that his food was great, but that his heart was even greater. With his calm and collected demeanor, Hans befriended many of the staff he worked with, and became a beacon of stability.

In 2018, FeedmeHRG decided to expand into a new concept featuring seaside seafood in a quaint atmosphere. The MARKET brand was born only because we sought to match the Chef with the Restaurant, not the Restaurant with the Chef. Hans took this brand and made it his own by creating PNW and Asian inspired dishes, featuring popular items like Salt & Pepper Soft Shell Crab, Lemongrass Shrimp & Grits, and our famous Lobster & Crab Rolls. His work created a new genre of cuisine in Downtown Edmonds and Seattle that quickly got the attention of food influencers with hundreds of thousands of followers.

Today Hans’s MARKET brand delivers next-level cuisine, through the staff he mentored in four separate locations: Downtown Edmonds, Seattle Art Museum, Olympic Sculpture Park, and Chateau Ste Michelle. His following not only reached the hundreds locally, but thousands around the country as they tuned in on social media only to recognize him as a culinary force to be reckoned with. He represented the Asian American Immigrant Dream: to be noticed and recognized for who he was, not what people wanted him to be. Hans’s true authentic self allowed him to connect with EVERYONE around him.

Hans is survived by his family; including his mother, father and two brothers, who relied on him as the contributing member of the household. The family asks that we respect their privacy, and has given FeedmeHRG their blessing to honor his memory, as Hans’s impact to those around him will ripple until the end of time. We want to take this moment to offer condolences and some form of closure to his family, friends and followers.

Hans was a beloved member of the Feedme Hospitality family. We offer our greatest sympathy to all who are impacted by his unexpected loss. Our hearts are broken alongside yours. Hans brought passion, creativity and laughter to co-workers and customers alike. His achievements will live on forever though the accolades he earned throughout the culinary world, the staff that he mentored and befriended, and the lives that he touched through his delicious food. As we remind ourselves to hold those close to us tight, we will forever celebrate Hans as a permanent part of the FeedmeHRG family.

Please consider making a donation to Hans’s family though their GoFundMe page as they navigate through this difficult time.